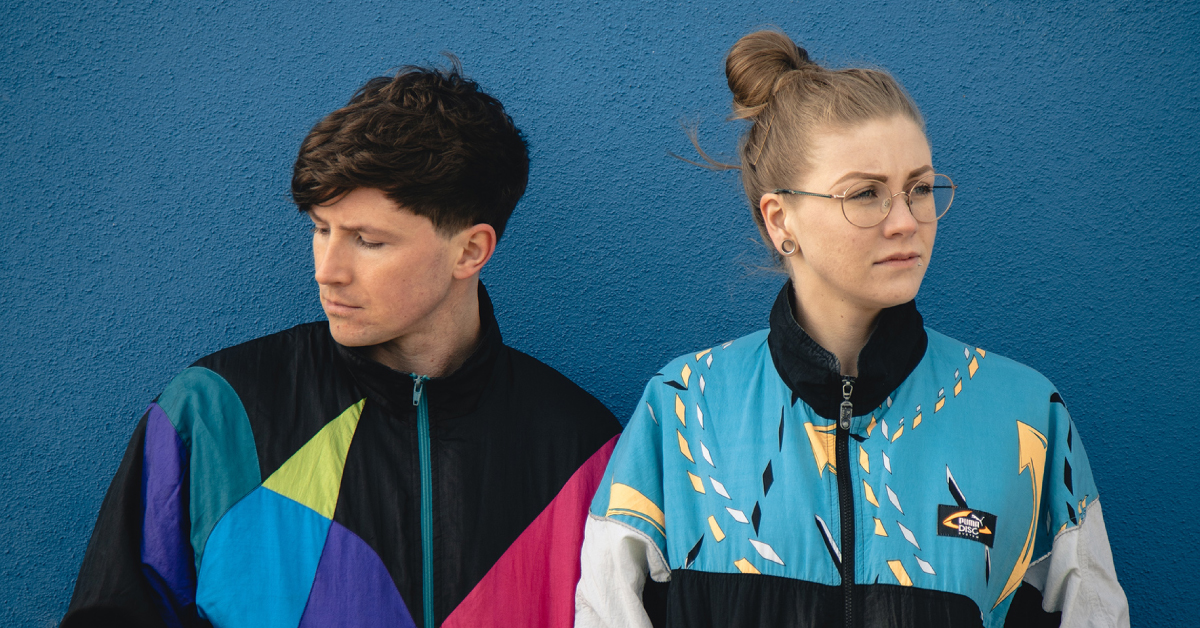 Having spent three insane years rising to the top of the Irish dance music scene and touring the world with their unique blend of electro-indie-house-pop, Christy Leech and Aimie Mallon are putting the brakes on their Le Boom journey for the time being. This hiatus will give the pair a chance to step back and look at their catalogue in detail and allow them to spend some well deserved time in the studio, but not before they’ve torn the roof off the Róisín Dubh on Friday, October 18.

Over the summer, between festival appearances and gigs galore, I got the chance to chat to the incredibly sound Christy Leech about the many things that have made Le Boom what it is. Original, innovative and intoxicating, Le Boom tunes are something special.

Having both grown up in county Meath, the duo were brought together by the Dublin music scene just three short years ago. While Christy had been playing Le Boom under a few different guises, it wasn’t until he saw Aimie playing at a gig that the duo came to fruition. The pair perform with such chemistry and camaraderie, seamlessly flowing through their set while radiating a buzz like no other, it’s hard to believe they aren’t life long friends.

“I love when we’re performing live together, there’s something very special about the two of us up there, myself and Aimie. That’s what we always come back to, it’s our comfort zone.”

Within the group, Christy likes to be involved in all aspects of the creative process. “I like to be part of all of the different parts, the music is just one element of it. It’s great to be able to do that and Niall [Byrne, their manager] has enabled me to be able to do that and makes sure I have time to do it.” While Christy writes, produces, sings and plays the keys, Aimie plays the percussion like nothing you’ve ever seen before. Glass bottles, cowbells and all things weird and wonderful are incorporated into both their recordings and their live sets to create a signature sound unique to Le Boom.

While most dance music producers come from a DJing background, Le Boom arrived at their sound through an indie, songwriting approach which in turn evolved into house and dance-driven music. “I would have come from a different background in terms of indie stuff, whereas Aimie would be more into the heavier side of dance music. Techno is her big thing, it’s her first love. We both came from different angles and we settled on what we have now.” An almost indescribable sound that encompasses an array of different genres, the music that Le Boom produce is in a whole other dimension. 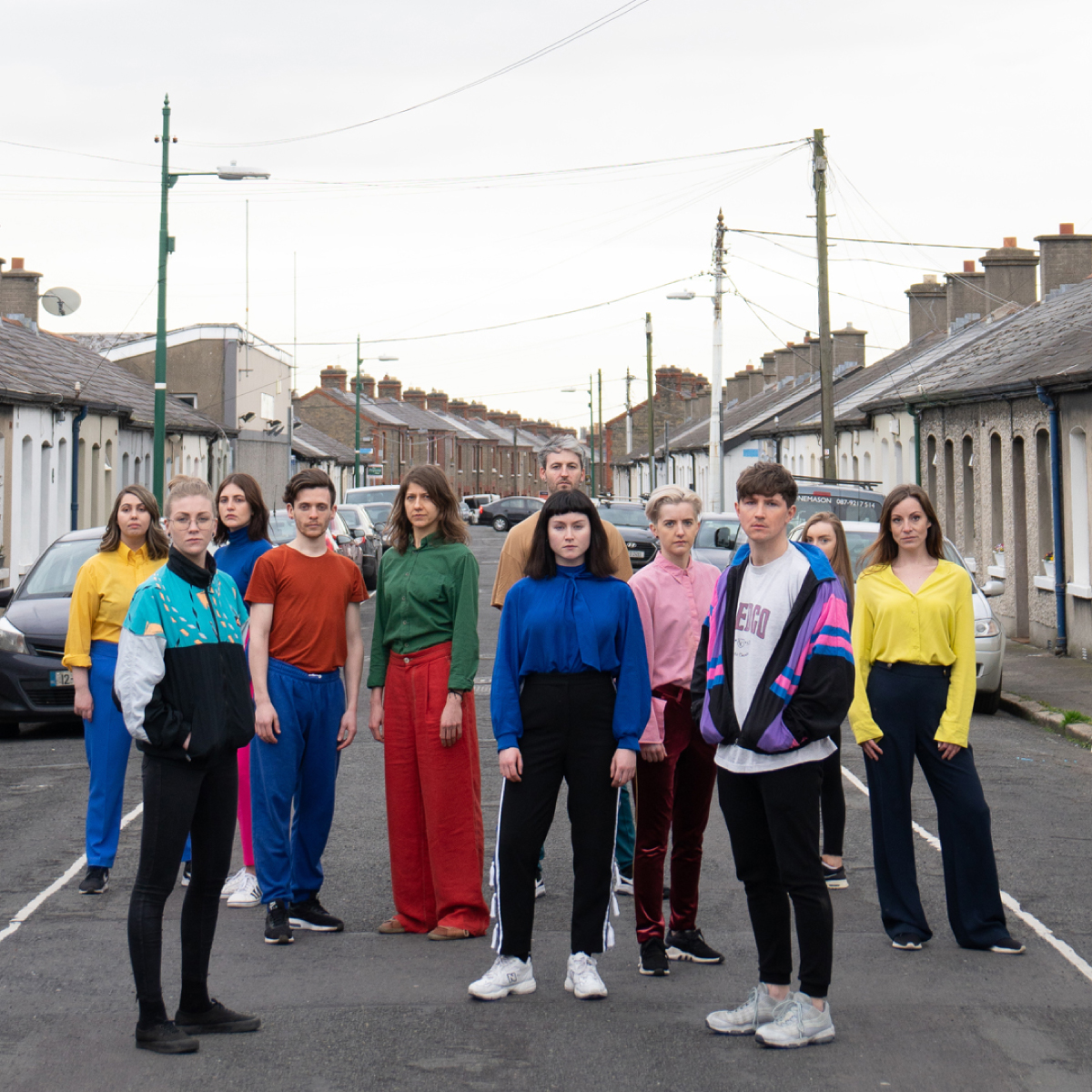 Christy cut his creative teeth while staying in an artist’s commune in New York City, where he lived rent-free in return for a monthly show of the tenants’ creative talents. (I’m not even slightly jealous, you are!). “There would be music, there was a drag artist, painters, poets, whatever really. It was just a mad night once a month and you had no choice but to be creative, it was great. When I got there I didn’t have a band so I just recorded different parts myself and looped them up, and I think when you start looping things, everything starts to feel more dance-y, it gets a natural verve or rhythm. I think that’s what started me getting into loops and dance music.”

Getting booked for gigs before they had even created enough material to fill a set, Christy and Aimie had to work hard and fast to keep up with the momentum they had built. “We were literally pulling all nighters for a week before a show to try to write and get a set together. It was mental and we never really got enough time to say ‘is that good or is it bad’ it was just like ‘is it done? Okay let’s move on’.” With this level of pressure came an intensity that enhanced their natural sound and added an air of spontaneity to it. “That was cool because there was an energy in that, but I think now with this break we’re taking we can take a step back and take a slightly more considered and less rushed approach to it all.”

Starting off with the melody and chords and morphing it into something that will bring even the driest of shites to the dancefloor, each song encapsulates a very unique air that is synonymous with Le Boom. Having teamed up with Æ Mak earlier this year on the incredibly catchy tune ‘Dancing Bug’, Aoife McCann certainly pulled the duo out of their comfort zone.

“It was really easy, we had the tune together in about three or four hours and we decided to leave it really simple and bare and not touch it much.”

It was sitting there and we didn’t really know what to do with it until Aoife suggested a video. She completely pulled us out of our comfort zone, she had us dancing in the video, which is something we never did. It was such a great day.” I don’t know about you, but the video – which features the trio, accompanied by a colourful entourage, bopping through Stoneybatter in perfectly synchronised unison – makes me want to head out and frolic through Shop Street every time.

Having appeared at some of the best festivals in the world, from Primavera Sound Pro to Electric Picnic, and performed in venues across New York, Reykjavik and Bilbao, Le Boom have become known for their energetic, sweat-drenched live shows. “We put absolutely everything into it, it’s such a huge part of what we do. The releases have been fine but the live shows have really been what’s got our name out there and what’s gotten us all of the gigs. It’s a pretty sweaty, mad, club vibe.”

“I have to say that while travelling to shows and all that can be a bit of a pain in the arse, when you’re actually there and you’re up on stage, the two of us, and we start playing it just turns into this great vibe and I love that feeling.”

If you’re one of the lucky few who’ve got your hands on tickets for their Róisín Dubh gig this month, you can expect some serious scenes. “The Róisín Dubh has been an amazing venue, we played there New Year’s Eve and it was just incredible, there was an amazing response. I think because it’s such a small venue and the crowd is right up on top of you and there’s just such a great energy.” Christy goes on to say how these more intimate venues compare to bigger festival sets. “Sometimes when we’re playing the really big shows, which are great too, you’re actually physically so far away from the crowd. It can be a little bit harder to get that real buzz and energy of the crowd, whereas you’ve got no choice when you have people literally right underneath you. In places like the Róisín you can really feel it. It brings you to another level of buzz.” 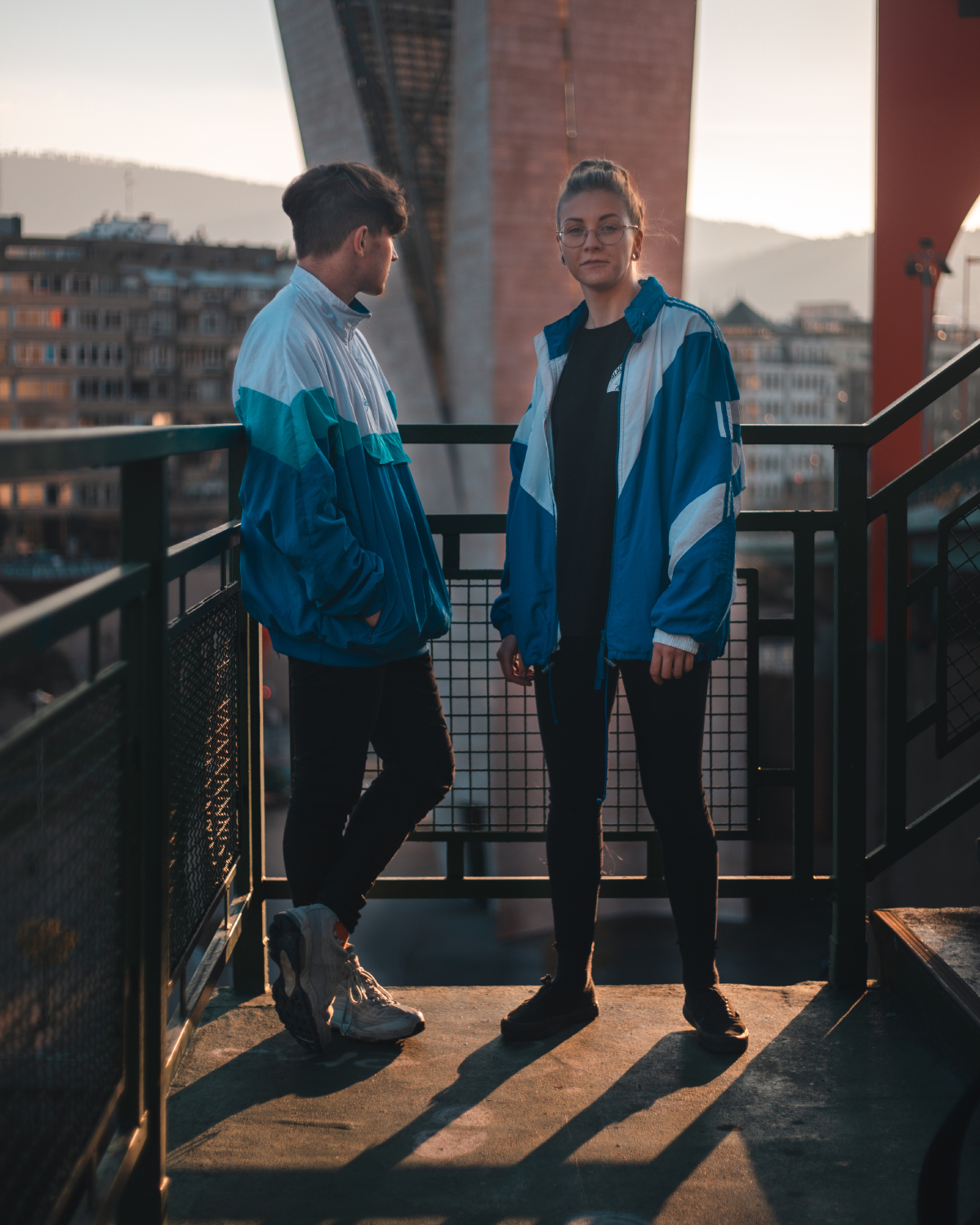 In their three years of performing live and evolving and elevating their sets, Le Boom have encountered a whole lot of career highlights already. From closing the main stage at Sea Sessions to playing after the insanely talented Caribou at last year’s Galway International Arts Festival afterparty, the stand out peak for Christy has to be closing the main stage of Body & Soul a couple of years back.

“We were on our way down to play Body & Soul for the first time and we got a call to say that an act were stuck in Berlin and couldn’t make it, so would we mind closing the main stage after Metronomy. At the time this was just bananas because we would have literally been playing only a year and a bit but just to get that call was incredible and it was a moment I’ll never forget.”

But all this success didn’t come without some challenges. “Just keeping up with the shows can be a little bit of a challenge but to be honest with you we’ve just been really really lucky. From day one we were getting gigs before we even had the songs for the gigs. We were getting huge amounts of work ourselves and for the first year and a half before we had a manager, we spent so long emailing people and begging for slots and doing all that groundwork. We’ve been hugely lucky that we’ve gotten this far but at the same time we’ve also put in huge amounts of work. It’s been pretty tough but it’s been amazing.”

As one of Ireland’s newest musical success stories, I had to pick Christy’s brain on whether he’s got any words of wisdom for anyone hoping to dip their toe in the Irish music scene. “Do something that’s unique to you as opposed to trying to be better than other people,” Christy advises. “Be better at being you because if you’re trying to put yourself in competition with other people, it just takes the realness away from what you’re doing. And also I think it just kind of backfires because you end up sounding like other people. Just focus on what makes you different and do that well.”

Remaining modest in the face of great success, it was an absolute pleasure to speak to the legend that is Christy Leech. His musical and production talents, married with Aimie’s unconventional percussion creates something that’s pure and utter magic. While we’ll be sad to see their pretty faces dip into the shadows for a little while, we know they’ll be back and better than ever. Until that time comes, I’ll be listening to ‘What We Do’ on a loop, trying not to cry. 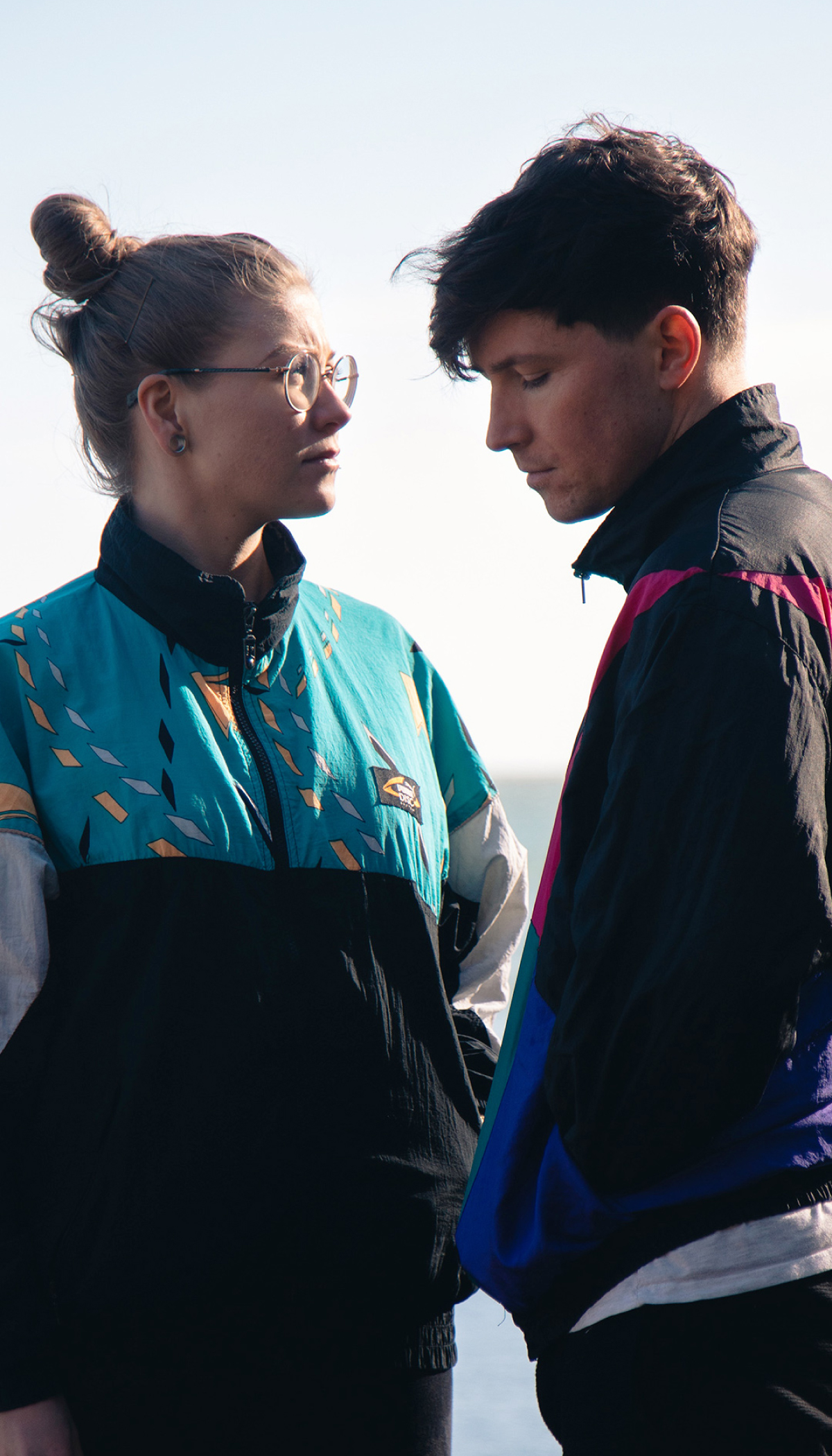