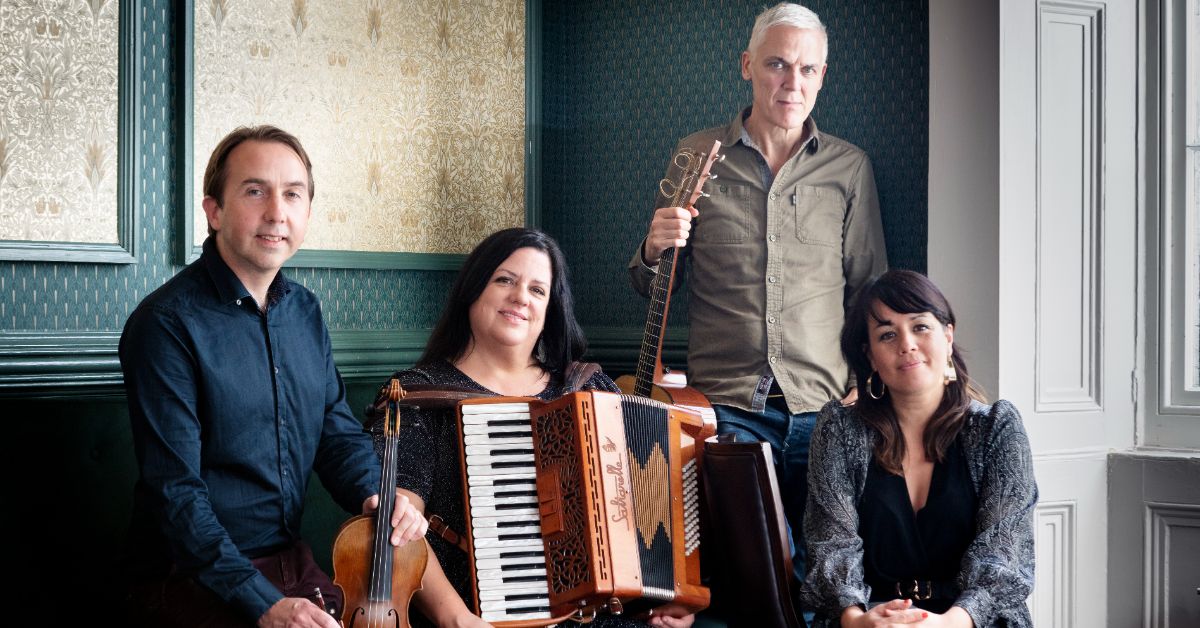 Music Network brings together Ireland’s brightest folk musicians for a very special live show in County Galway's Clifden Station House among other dates around the country. Find out more here...

“Among the finest singers in the country” – Hot Press [on Kennedy’s The Whileaways]
“Sligo fiddler Oisín Mac Diarmada, a driving force of Téada, has long had a reputation for balancing the intricacies of a tune with a deeply expressive style” – The Irish Times
”[An] astonishing array of virtuosity” – The Washington Post [on Murray’s Cherish the Ladies]
“His guitar playing is tremendous” – Folkworld [on Hennessy] 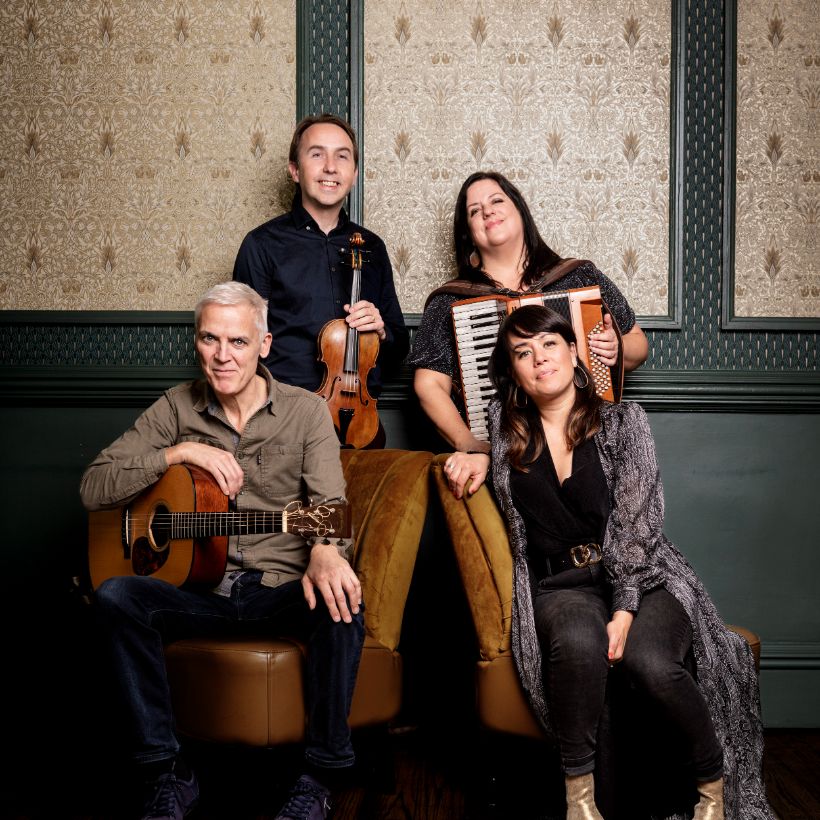 Music Network’s Spring 2023 Season begins in February with a newly curated line-up featuring 4 musicians who have been integral to the success of many leading Irish traditional and folk groups. The Whileaways’ Noriana Kennedy is joined by Téada’s Oisín Mac Diarmada on fiddle and Mirella Murray, accordionist with Cherish the Ladies. Donogh Hennessy, a founding member of Lúnasa, brings his trademark rhythmic drive to complement the harmonic textures and melodic explorations of this vibrant trio and complete the line-up. With sublime songs, energetic tunes and captivating arrangements, this will be a musical cocktail to savour.

RTÉ Radio 1 Folk Awards multi-nominee Noriana Kennedy is a founding member of critically acclaimed trio The Whileaways. She has recorded four albums with the group whose engaging lyrics and melodies have seen them garner legions of fans both in Ireland and abroad. Alongside revered Galway singers Noelie McDonnell and Nicola Joyce, Noriana’s trio is known for its beguiling tapestry of harmonies and beautifully crafted original songs.

Former lead singer with phenomenal Irish traditional band Solas, Noriana possesses an engaging and unique songbook that crosses oceans from Waterford to America, Scotland and a thousand heart-worn places in between. With a voice that The Irish Times described as "a knockout: translucent and tenacious in equal measure", she has earned a prominent place in Ireland's rich roots and folk music scene.

Noriana performs compelling and stunning versions of old-time songs, folk ballads and original compositions, creating a sound that is truly her own. Her debut album Ebb n Flow was noted for its “exquisite phrasing” (The Irish Times) and since then she has honed her considerable artistic skills with The Whileaways, prompting Irish Music Magazine to describe their music as “profound and insightful, tightly woven, experimental, fresh and energetic”.

Oisin Mac Diarmada is an All-Ireland winning fiddle player, and founder of the internationally renowned group Téada. He has been described by The Irish Echo's Earle Hitchner as "one of the most gifted and creative traditional fiddlers playing today".

A graduate in Music Education from Trinity College Dublin and Royal Irish Academy of Music, Oisín began playing fiddle in Clare at a young age, over time developing a deep interest in the playing style of the Sligo region having moved there at the age of 11. He formed Téada in 2001, with whom he has recorded a number of successful albums on the Gael Linn & Green Linnet labels. Highlights on the concert stage have included appearing at specialist music festivals such as Masters of Tradition in West Cork, accompanying Irish President Mary McAleese on a State visit to Romania and a guest solo appearance with the Southern Georgia Symphony Orchestra in the USA.

Long-standing member of Grammy-nominated and Emmy award-winning band Cherish the Ladies, Mirella Murray is an All-Ireland winning accordion player and has long been recognised as one of Ireland’s leading traditional musicians.Mirella grew up in Claddaghduff on the north west coast of Connemara, and music was a fundamental part of her upbringing. Encouraged by her father John Joe, a notable sean nós dancer, and accordion teacher Mary Finn, she blossomed with enormous support from champion of the arts and long-time director of Clifden Arts Festival, Brendan Flynn. Collaborations with superb musicians such as fiddlers Liz Kane and Tola Custy saw her tour throughout Ireland, Europe and the USA. Her album Three Sunsets with Tola Custy received rave reviews and was voted in the top five albums of 2002 by The Irish Times. The duo was nominated for Best Newcomers by Irish Music Magazine in 2003.

As well as being a member of Cherish the Ladies for nineteen years, Mirella has toured the world with an array of wonderful musicians including Laoise Kelly, Mary Shannon, Collette O’Leary, Michelle O’Brien, Carl Hession & Rhythm of the Dance, John Joe Kelly and Jarlath McTernan.

Founding member of Irish super-group Lúnasa, Donogh Hennessy is an award- winning guitarist and composer. He was born in Dublin and is now based in Dingle in West Kerry. As a member of Lúnasa, described by the Irish Voice as “the hottest Irish acoustic band on the planet”, Donogh played a key role in crafting the band’s complex arrangements and shaping their unique sound which pushed the boundaries of traditional music and energised audiences the world over.

Donogh has also performed and recorded with many other eminent Irish artists over the years such as Lumiere, Sharon Shannon, Seamus Begley, Pauline Scanlon, John Spillane, Damien Mullane and The Sibín Orchestra. In addition to performing live and touring, Donogh is a full-time recording engineer in his own recording studio in Dingle where he produces, records and performs with a constant array of outstanding musicians. He has recorded music for film and theatre and has written two music books including Lúnasa The Music (1996 – 2001). 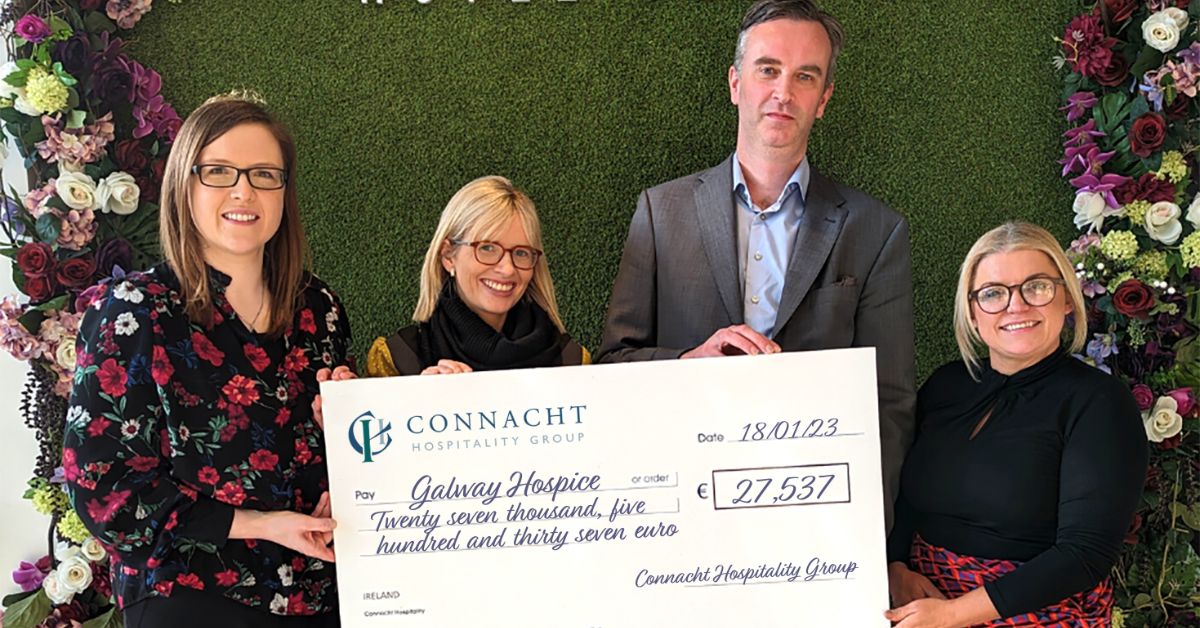 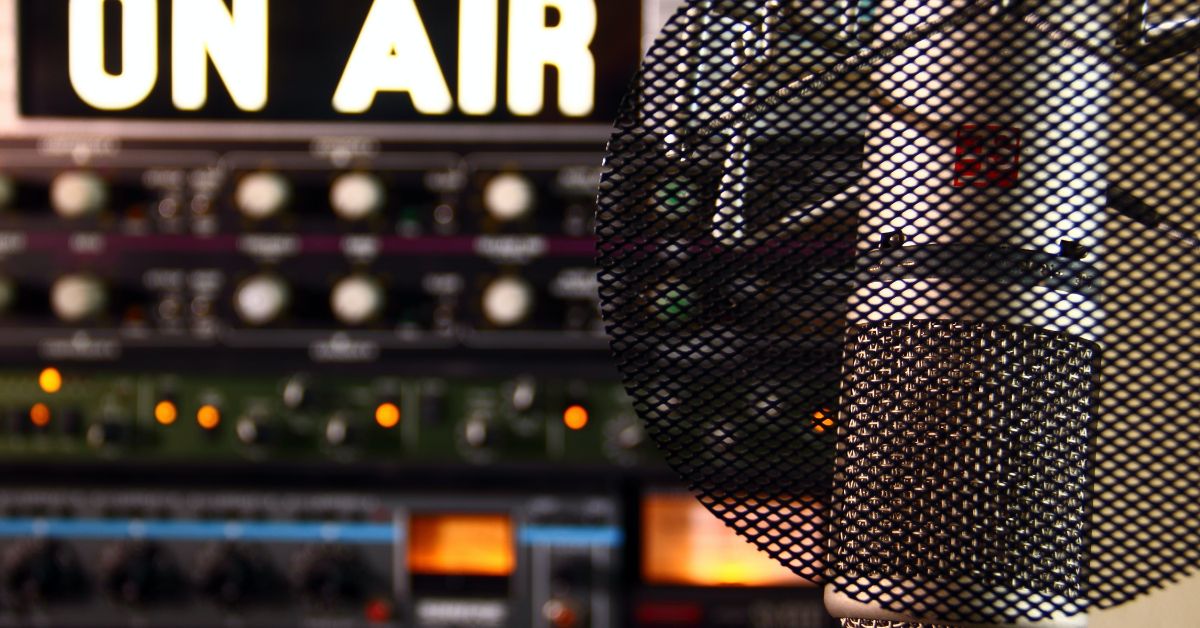 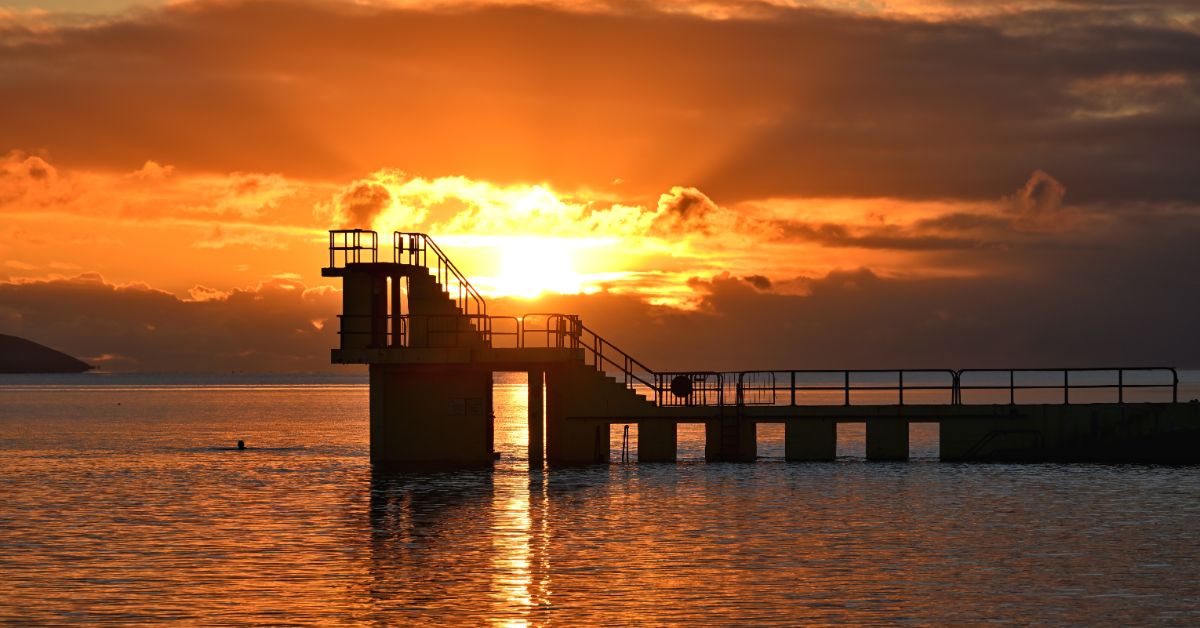 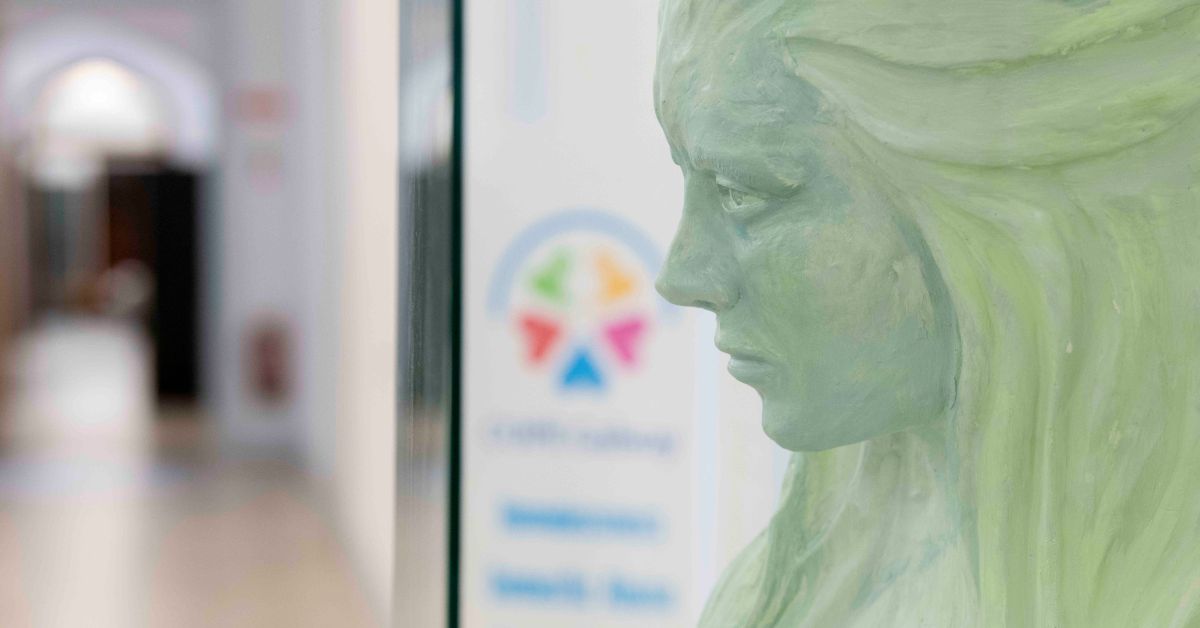 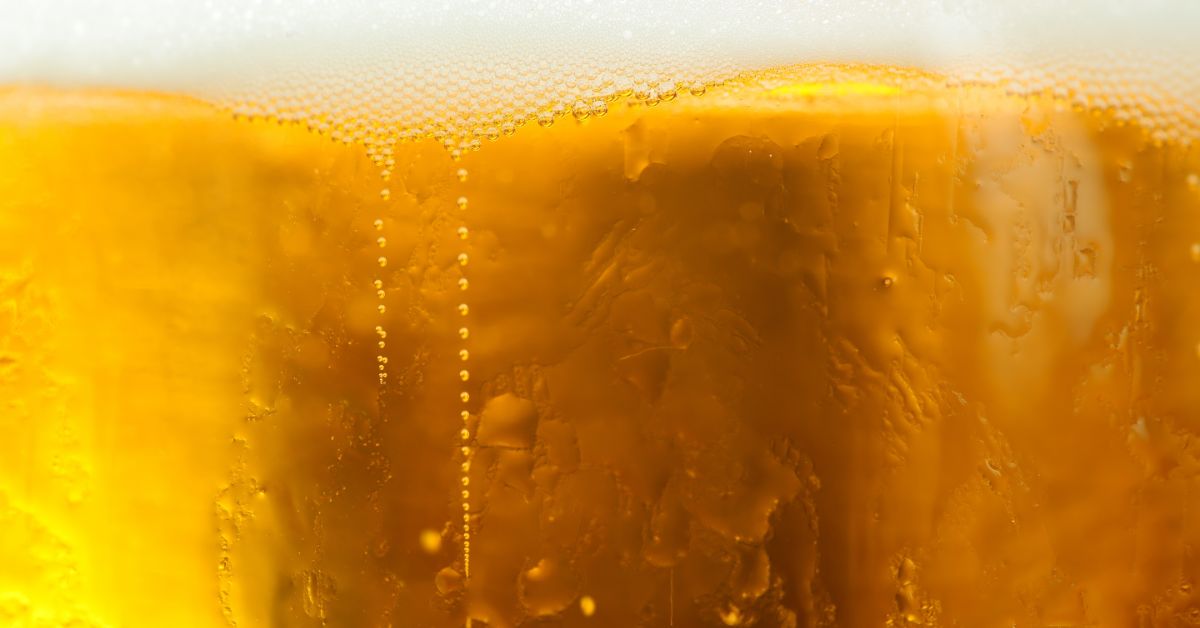 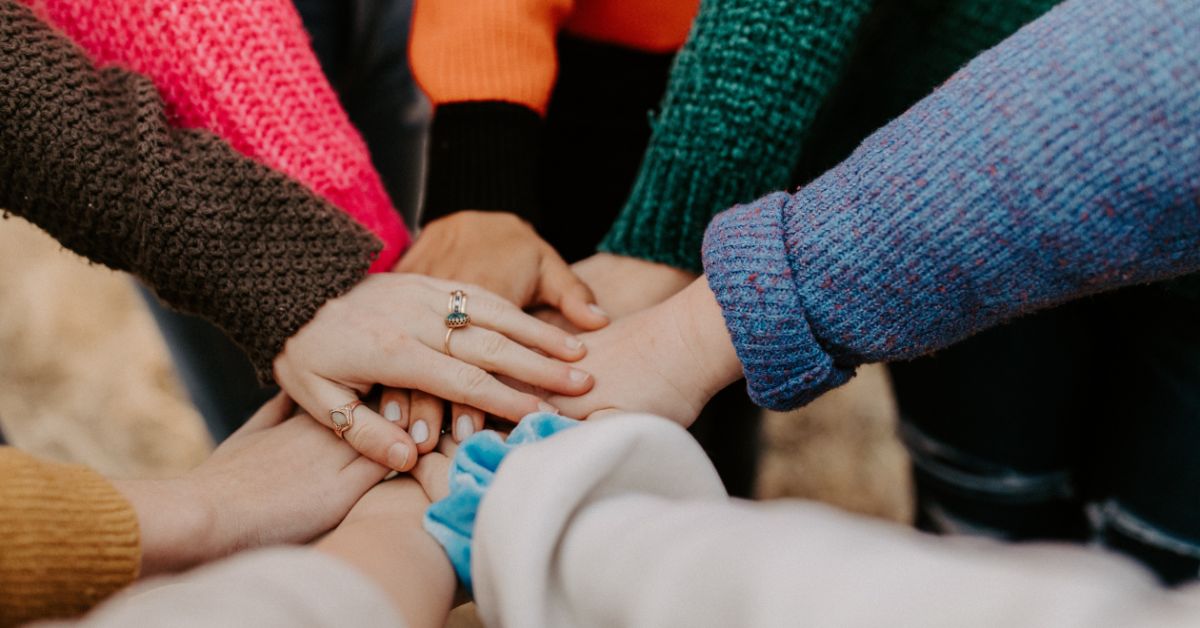 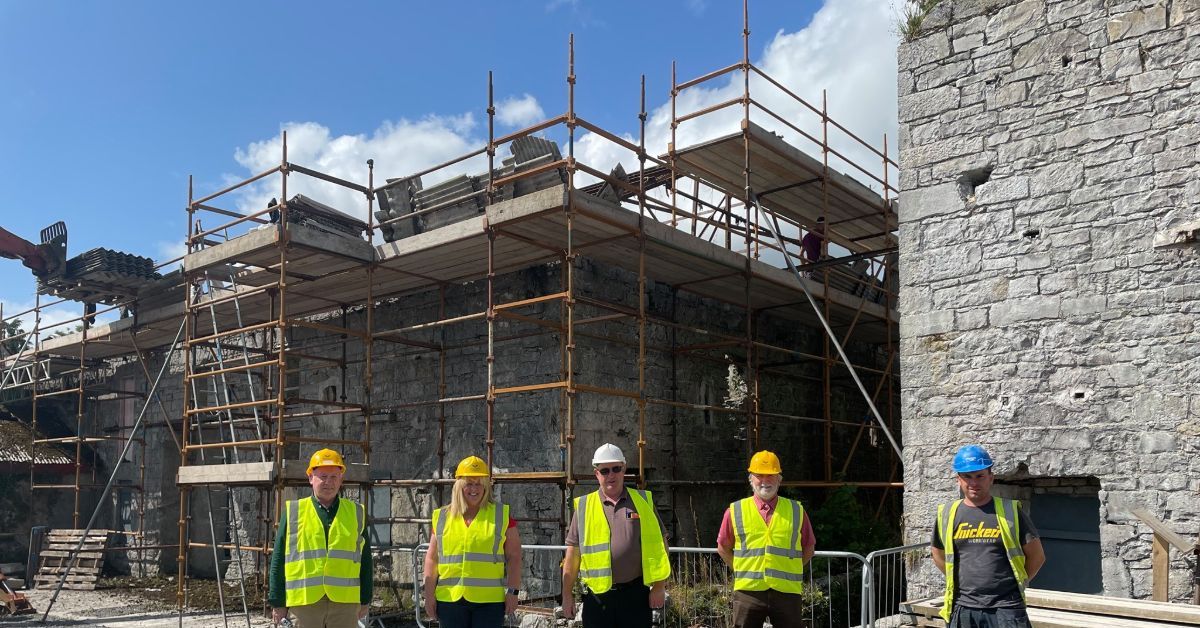 Distillery Diaries: See Behind The Scenes at Ahascragh Distillery