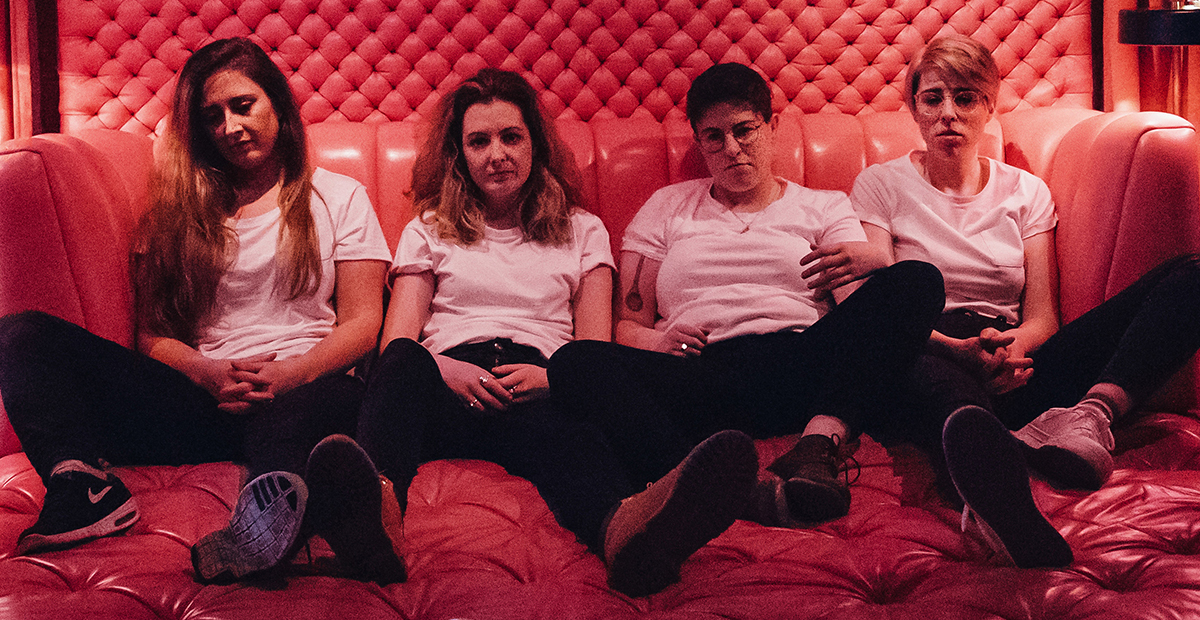 Pillow Queens are the kind of band that will take over your playlist from the first second you hear them. They are often labelled as punk due to their DIY approach and focus on socio-political issues, but they infuse enough surf and indie-rock to the music to attract a wider audience to their underground sound. Their fan-base is growing steadily after a busy few years. We chat to the band as they prepare for a GIAF headline show and a busy summer…

Pillow Queens are Sarah Corcoran (guitar/lead vocals), Pamela Connolly (bass/lead vocals), Cathy McGuinness (guitar/vocals) and Rachel Lyons (drums). They layer fuzzy, distorted guitars with creamy vocal harmonies and sing about whatever issues are foremost on their mind. All four are honest, hard-working and have bucket-loads of conviction. These endearing qualities are what give Pillow Queens the edge and have seen them achieving great things in just three years.

Their single, “Gay Girls”, was nominated for a Choice Music Prize. They received air time on BBC Radio 6, with Steve Lamacq describing them as “deceptively infectious, with sharp hooks and sharp nails”. Their debut EP, Calm Girls, was released to a lot of praise among indie blogs. Follow-up EP, The State Of The State, was released last year and its single, “Favourite”, earned plenty of radio time. The band have played Body & Soul and Eurosonic. They’ve also supported big names such as Pussy Riot, Soak, Idles and Future Islands. So how do the four ladies deal with such a meteoric rise from creation to indie-stardom? Read on to find out… 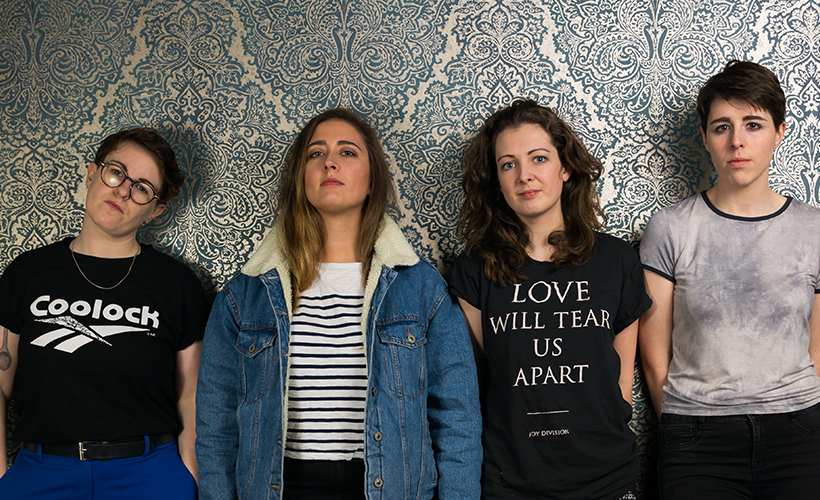 You’ve been a band for about 3 years now. What have been the highlights?

We’ve been non-stop since we started so thankfully there hasn’t been much time for lowlights. Highlights definitely include our European tour with Soak earlier this year, getting the chance to play with Future Islands & Idles in a stadium last summer and having our song, “Gay Girls” nominated for a Choice Music Prize. We love touring so any time spent on the road is a good time.

There have been a few varying reports about how Pillow Queens began. I probably won’t get a straight answer about that, so how do ye wish it all began?

This is like the way everyone always asks how much a new baby weighs, like do people actually want to know or do they just feel compelled to ask? There are definitely elements of truth to each story we’ve told about our beginnings but the truth is we are actually ‘Popstars’ 2001 winners Hear’say but we thought they gay girl thing might be a bit of a selling point so we changed our look. Pure & simple baby.

You all spent time with other bands before forming Pillow Queens. What’s different about this group?

We’ve got quite a lot of structure so it keeps us in a nice routine. We have a lovely little practice room we’ve decorated to make a pleasant place to be and we’re always sure to have tea & biscuits in the wings for emergency breaks. We also talk about everything as it happens so no potential issue has any time to fully form. We have pretty similar interests too so it’s nice spending time together. Sisterly love forever.

Your previous projects all had fantastic names such as The Skuts and Bear Plays Spoons. Where did you find the inspiration for the Pillow Queens moniker?

Pillow Queens was one name from a long long list and it ended up being the one which sat best with us. Plus we love signing our emails ‘xox PQties’

Pamela has previously said that your song “Cuckoo” taught her how to play bass properly. It’s endearing that you are all learning as you go along. What’s the biggest lesson ye have learned so far?

We’re all songwriters but we have completely different styles of forming songs so there’s always scope for learning from each other. I had never played bass before PQ and had a hard time picking bass parts out of songs, it’s only relatively recently I’ve learned the importance of bass in a song which has made writing even more exciting. Cathy & Rach are always teaching myself & Pam music theory ‘cos we know absolutely nada about it. I tried learning “Happy Birthday” on piano for Cathy last month and it took me 3 full days, so every day’s a school day!

You have been one of the busiest bands around since ye began playing together. Are you all full-time musicians or do you need day-jobs to keep afloat? What are your thoughts on the government’s new initiative to provide musicians with an “Artist’s Dole”?

We were delighted to see the Artists Dole extended to musicians as there is such a thriving scene of musicians in the country so it only makes sense to support their growth. We’re all working as well as making music at the moment and will continue to do so as long as it makes sense. It can of course be challenging to juggle the two but I guess it’s all about trying to get the right balance? It’s a work in progress but we’re getting there. It would be dreamy to be able to live off music earnings.

What’s the biggest challenge you’ve had to overcome in your career?

I think balance, on a large scale. Along with balancing work/life/music, we’ve also had to learn to balance our own personal relationships with our working relationships with one another. I think it’s really important to nourish friendships and not get caught up in networking and trying to work within the industry. Post-practice pints are a must.

There is an emergence of strong female voices on the Irish music scene such as Laoise, Ailbhe Reddy, Saint Sister and yourselves. Is gender equality in music going in the right direction?

I love all of these acts!

Gender equality needs to be tackled on a wider level, and that starts with people making a conscious effort to programme more festivals with lineups which aren’t predominantly male acts, not write reviews commenting on women’s appearances, and funding and supporting projects which put a spotlight on the wide range of work being made by non men, such as We’ve Only Just Begun, the festival running in Dublin in August.

Sarah has said before that it was a real triumph, being able to sing a song called “Gay Girls” in St. Luke’s Church. How do ye feel about the state of the country since then?

We’ve come a long way, but we still have a long way to go. If this country is to be one we’re proud to call home we need social housing, we need better healthcare for trans folk, we need to end direct provision and we need affordable mental healthcare. We’re getting there!

You’ve been labelled with the “punk” tag a lot, and asked about it even more often. Many journalists ask about things like gender equality and the state of the country (ahem, like above, sorry!). Are you happy to be tagged as punk and to be asked to comment on social situations or would you rather people focus more on the music?

I think our affiliation to the punk label does actually stem from what it means as a genre rather than an ethos. When you hear loud guitars you might automatically think of punk music and some of our influences definitely would be punk so it’s no surprise we often get tagged as such. I don’t think genre holds as much weight as maybe it once did and would therefore rarely constrain us. Question wise, we’re happy to comment on the state of the state!

If you had to give your music a label, what would you pick?

A record label. With much money.

You are known for your personal, almost nervous, lyrics that give listeners a real insight. Your latest single “HowDoILook” is possibly the most personal. Are you coming to terms with laying everything out for people?

I love the idea that our lyrics are nervous. I’d compare writing lyrics to sending a risky email so I’ll find myself saying “fuck it” before sending a new song to the girls, then throwing my phone across the room so I don’t see their responses. Thankfully we have a rule that if you don’t want to discuss what a song is about you don’t have to so there’s no pressure there. I think it’s easier to write from a personal perspective because you already have a backlog of emotions and… vocabulary? So it’s easier to have a kind of stream of consciousness.

You’ve played Galway a few times in the past. What can the audience expect from your show?

Ugh Galway is one of our favourite places to play. A gig is always a good time and audiences in Galway have always been really receptive to us so we’re really excited to get back there. We have a ton of new songs we’re hoping to try out so hopefully the audience will be on our side again on July 19th in the Róisín Dubh!

What’s on the horizon for Pillow Queens, both near and far?

(Aka no idea, but probably an album early next year and some touring to new places. We’re also particularly excited to be heading to Airwaves festival in Iceland in November!)

We’re also releasing an Elaine Mai remix of “Gay Girls” on the day of our Galway gig so we’re very excited about that too!

What would be your dream gig, either to play or to attend?

Ok so it’s a tiny intimate gig. Let’s say the Róisín Dubh, for arguments’ sake. The lineup is… Courtney Barnett, Yeah Yeah Yeahs, Mitski, Lankum, Hop Along and the Pixies. They all play a Pillow Queens cover during their set and I watch it whilst drinking a Galway Hooker (ahem, the beer)

Are there any tracks or albums that you are really digging at the moment?

I’ve been listening to Saint Sister’s Tiny Desk session exclusively since it came out because it’s devastatingly beautiful, but besides that I’m still obsessed with Soak’s new album Grim Town and everything Uly is putting out is 10/10. Sorcha Richardson is churning out bangers too.

What’s your favourite way to relax after a long run of gigs?

I’m so boring when it comes to this kind of thing. When I get back from tour I need to organise absolutely everything so my head feels organised. This week alone I’ve arranged my entire kitchen into jars, cut the grass twice and painted the living room. I’m also editing the next PQ music video so that’s good for a wind down. Generally hanging out with my dog or other people’s dogs is a go-to though.

Recommendation for the best hidden gem of a spot in Dublin, for a pint or a snack?

Aobaba on Capel St. does the best Vietnamese soup in the world (ok, I’ve never been to Vietnam but I’m fairly confident) but it’s not really a hidden gem anymore ‘cos it’s impossible to get a seat. Coke Lane Pizza in Lucky’s on Meath St does the best pizza in Dublin and its smoking area is stunning.

Pillow Queens play a headline show at The Róisín Dubh on July 19th as part of The Galway International Arts Festival. Tickets are available to buy HERE. Support from The Claque.