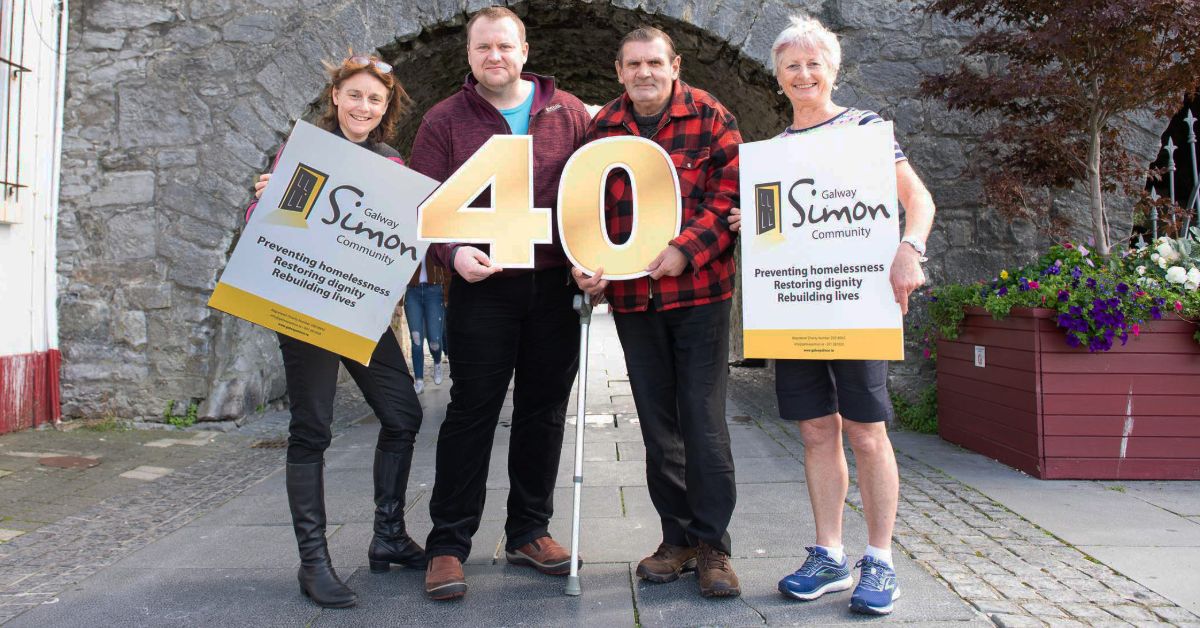 Local homeless charity Galway Simon Community is calling on people in their local community to join them in marking the organisation’s 40 years in Galway.

The charity is inviting past and present clients, volunteers, staff and supporters of the organisation to join them to mark their contribution in helping to prevent thousands of people from homelessness locally. The event, Marking 40 Years of Galway Simon, a culture evening of storytelling, music and art, will take place on Thursday 17th October at 7pm in The Ardilaun Hotel in Galway.

Galway Simon, founded in 1979, was originally set up by a group of students who refused to accept homelessness. With the support of the community, the organisation is now one of the leading homeless service providers in the region. At the event, they will be joined by some of the original volunteers who were instrumental in sowing the seeds of the Simon Community here in Galway. Other contributors on the night will include the Galway Simon Music Project, local historian Tom Kenny, poet Mary O’Malley and author Ken O’Sullivan, in addition to other supporters, staff members, volunteers and clients of the organisation.

Denis Connolly, well-known Galwegian, is one of the original clients of Galway Simon Community and explains what it was like back in the late 70’s when Galway Simon was established. “The Simon here in Galway used to bring me soup and sandwiches. They were the only friends I had back then. The workers used to sleep the same as we did on the floor in the house for homeless. It was a tough job for them and it was no easy place to be”, Denis said.

Speaking about the event, Karen Golden CEO of Galway Simon Community, noted the contribution the local community has made to the organisation and welcomes all to join on the evening.

“As we mark the 40th Anniversary of Galway Simon, we reflect on the enormous support we have always received from the wider community. We are delighted to invite past and present clients, volunteers, staff and supporters to join us for our 40th anniversary event. The support of our community has been vital in helping the most vulnerable in Galway to turn their lives around, to live with dignity and ultimately to close their own door on homelessness”, Karen said.

The event is free but pre-registration is required. Click here to reserve your place to join Galway Simon and friends in marking 40 years.