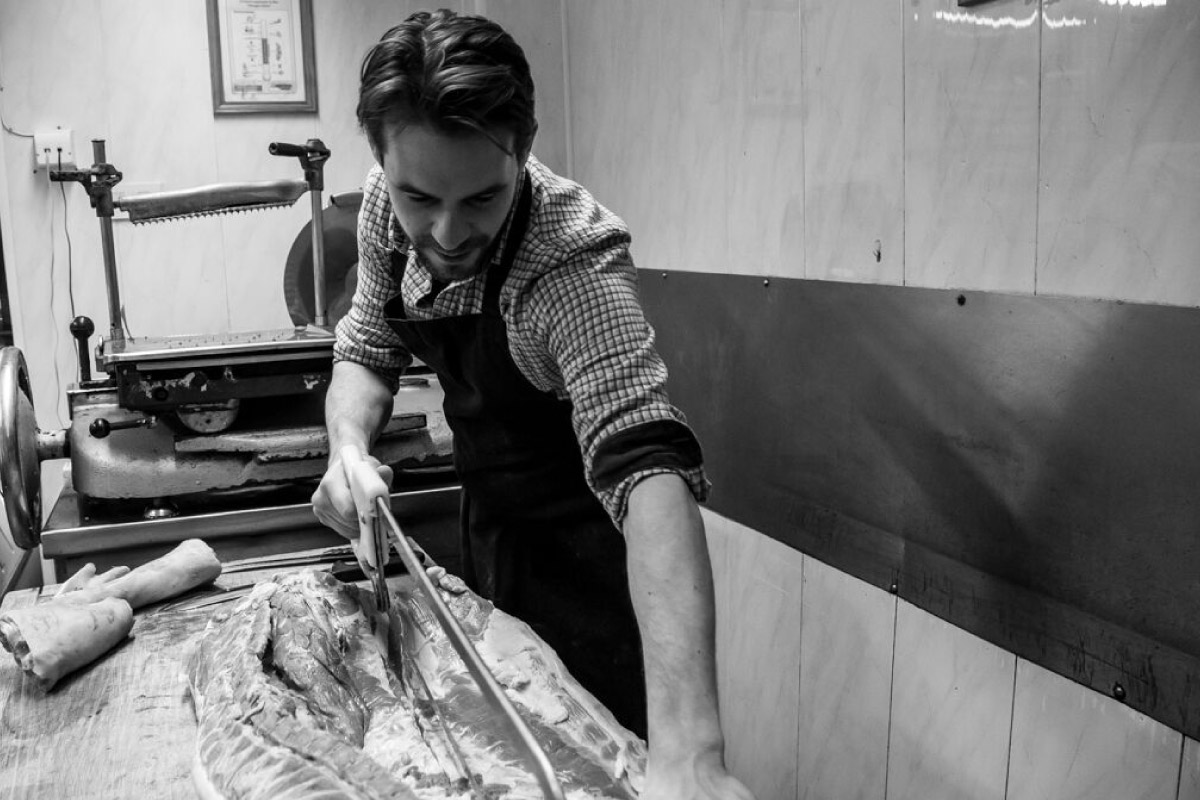 JOHN HERTERICH: TAKING THE FAMILY NAME TO THE NEXT LEVEL

A trip to Herterich’s Pork Butchers has become a tradition that spans generations, with families from far and wide becoming well-known regulars in the butcher shop. In the midst of these long-standing traditions, there is an air of creativity and excitement echoing out the doors of 1 Lombard Street. Since taking the reins of the shop, John Herterich has taken the Herterich name to the next level, while remaining true to his family legacy.

We caught up with the third generation pork butcher to chat about what life is like behind the doors of the much loved butchers, keeping the spirit of the place alive and what meaty delights lie in store for the summer months.

John’s grandfather opened the doors of Herterich’s Pork Butchers in Galway way back in 1940, while his brothers opened up in Tuam, Castlebar, Westport and Longford. “They were like a little German mafia taking over butchers. We used to have queues out the door every day. My father and his brother were actually born upstairs so it’s a really close knit thing.”

The future of the shop was called into question when tragedy struck the Herterich family, but John decided to step in, and once he did, he found great love in the art of butchering. “I went in, learned the trade and started playing with flavours and looking at the business as a whole and seeing what I could do to develop it a bit more. I had this great teacher as well, this guy who has been there for nearly 35 years, he trained me in. It was a learning curve because I had never ever done it before. It was totally jumping in the deep end with weights on your feet.” 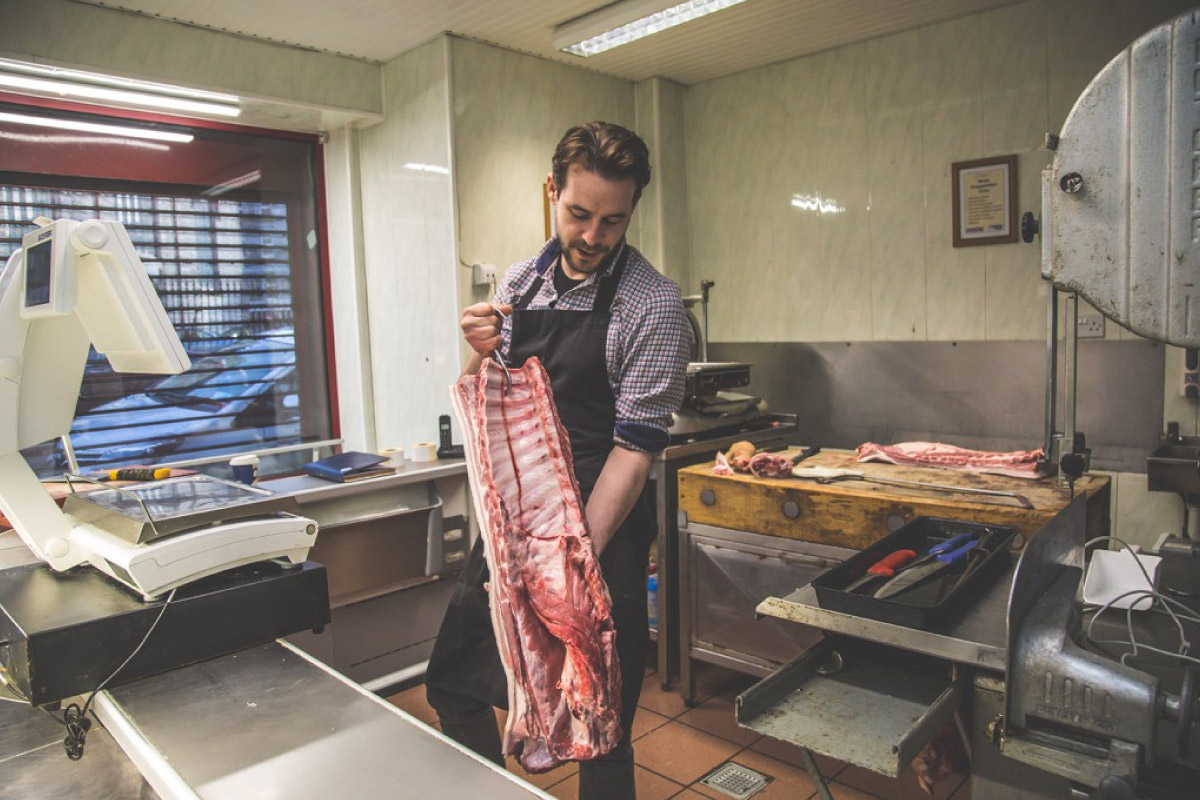 The cornerstone of this business is the presence of deep-rooted family traditions that have spanned decades. “There are tonnes of things we haven’t changed at all; our brine methods would still be the same they were 80 years ago! We still cure all our own ham and bacon. We still hand make every single sausage and we make every tiny bit of seasoning so it’s actually really traditional. There would be almost no one left in the country doing what we’re doing on that kind of scale, where you change your brine barrels every month. It’s a lot of work but you get good results and it’s totally worth it. The recipe for the breakfast sausage is the exact same as it was 80 years ago, we haven’t even changed that down to a gram, which is quite cool.”

Other major aspects of Herterich’s business are creativity and innovation, elements which John has skillfully enhanced over the years. “The creative side of it, to me, is the best part. I was in San Sebastian four or five years ago and I tried a thing called Morcilla that I had never had before and I remember thinking I have to try to recreate that back at home. We did and we ended up getting an award for it three months later for innovation. I couldn’t get it anywhere so I said I would give it a go and make it myself. It doesn’t always work and we come up with some shocking stuff! We tried a chocolate chilli bacon and it was horrendous but about 70% of the time they work out… I think just being ballsy enough to give something a go is so important.”

With John at the helm, Herterich’s Pork Butchers have garnered every success, winning numerous awards and accolades for their innovative creations. When asked about his proudest moment since taking the reins of the business, John is incredibly humble. “It’s not really even the awards, it’s just really nice having family come in and see the changes that have been made and that they’re really happy. Also, just keeping the thing going! It’s actually growing and growing. We’ve gotten really creative and really innovative which is the only way to sustain something like this and keep people interested by trying new things. I suppose holding on to all of our old customers and new customers as a whole, and everyone on staff are very happy. Everyone gets to have their say and be creative.”

Collaborating with local restaurants and heading out to markets and festivals are hugely important to Herterich’s and are things they are constantly trying to do. Currently teaming up with Caribou at their stall in Tiny Traders Village, the butchers have collaborated with a number of restaurants in the past to great success. “We meet with chefs, we brainstorm, and we see what they actually want from us and we try our best to fulfill that. This thing we’re doing now with Caribou is great. It’s lovely handing over your products and seeing someone eating it in front of you, seeing them enjoying it… there’s something extra nice about that. 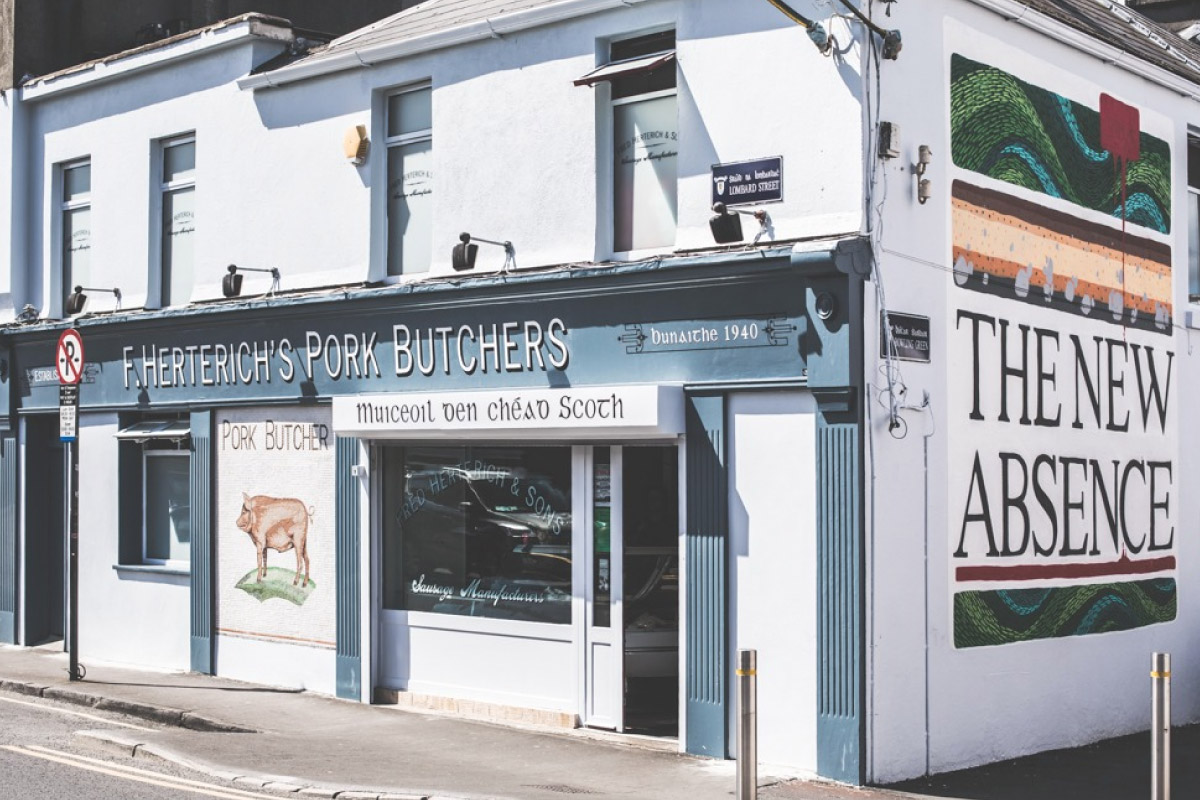 “When you’re collaborating with someone, you want to impress them as well as being really happy with it yourself. It keeps you upping your game. Collaborating is something we’re constantly doing and the guys up in Caribou are just fantastic, they’re really creative. Having used some of our products really really well, it’s one of the places you can go and get the best of our product.”

A seriously scrumptious new range of meaty delights are on the cards for summer time, along with some appearances at a couple of festivals, and the Herterich’s crew are going to make sure everything is prepared to the highest possible standard. Some other exciting collaborations include a range of bespoke puddings exclusive to Dela Restaurant, including a creative blend of morcilla and savoury white loaf pudding. You can also head around the corner to order a beautifully cooked Porchetta from the gang in the Universal.

“We are the most traditional and then it’s like Willy Wonka’s sausage factory at the same time!”

At Herterich’s, they recognise what the customer wants and encourage them to try new things. They treat each person who walks through the door with great care and consideration and it is with the help of their loyal consumers that the butcher shop has been able to grow and evolve, taking each piece of advice and feedback on board. Each member of staff has a unique creative flair and a willingness to try something different, skills which are incredibly important in this line of work. Without their steadfast customers, devoted employees and boundless ingenuity, Herterich’s Pork Butchers would not be the award-winning success it is today, and with John Herterich at the fore, the family traditions will live on.

Herterich’s can be found on a range of Galways diverse menus including Café Temple, Biteclub, The Stop B&B, McCambridges, Handsome Burger and new arrivals Ruibin on the docks. Drop into the guys on Lombard st and try out some of there new range of products for the Barbeque breakfast and more. 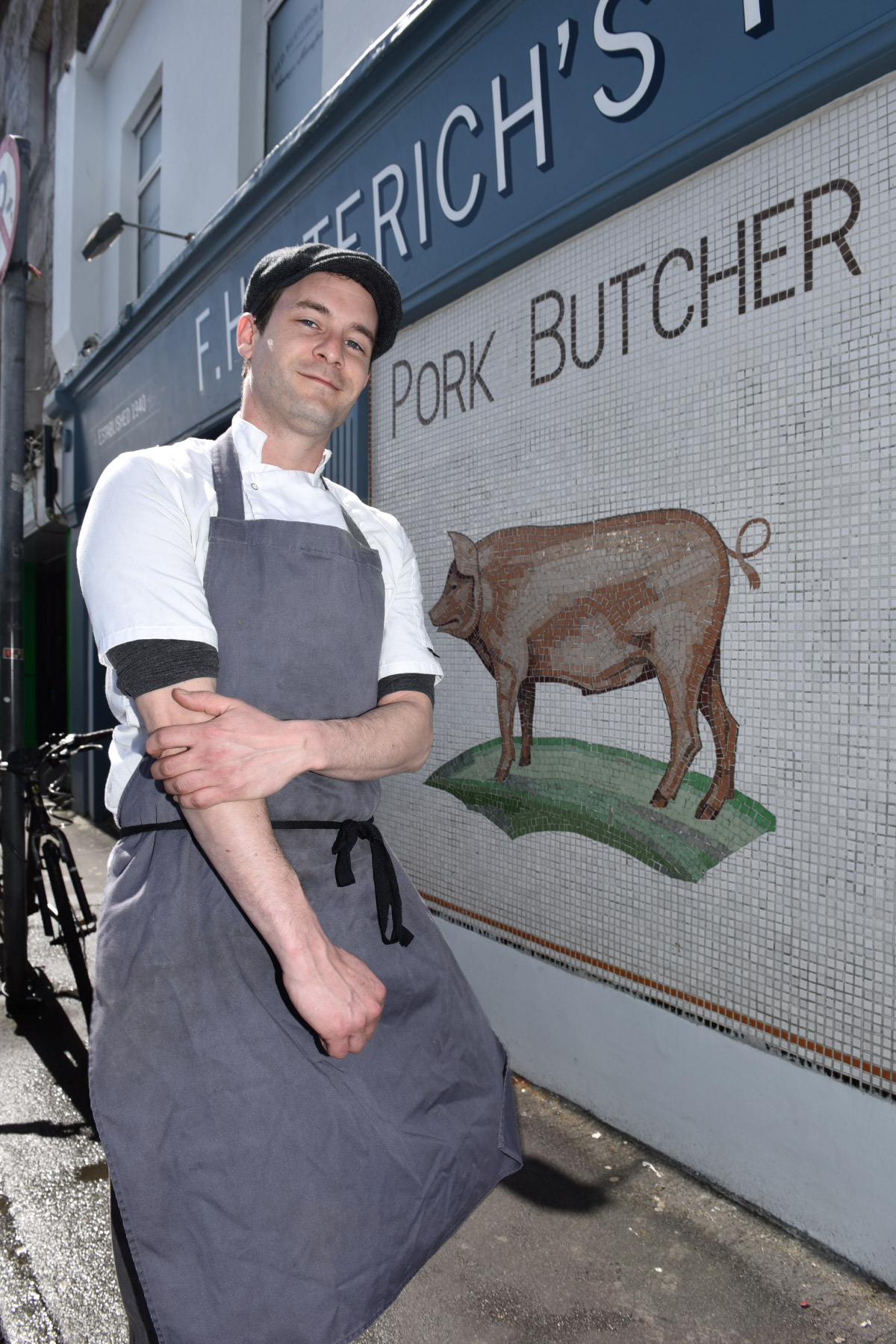